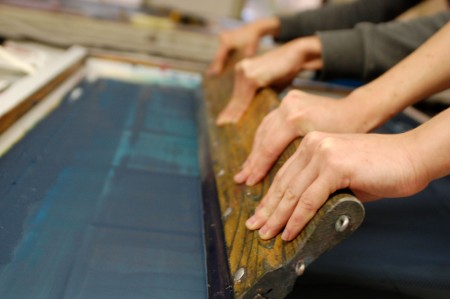 In the silkscreen studio, Audrey Hurd and WSW Studio Manager Chris Petrone are each pulling one half of a long squeegee across a 55×39” screen burned with a large halftone of a smooth and curving form. The ink – once thick as cake frosting – is finally the right consistency, and it pushes through the mesh onto a grid of white tiles arranged scrupulously on the table. It will take four separate screens to piece together the human-sized funeral urn Audrey is silkscreening onto her ceramic tiles.

Playing with the transformation of earthy materials like clay and ashes, Audrey explores the urn as a physical container for remains, memories, and meaning – a proxy for that which has been lost. She wants to know: “Why, when something is at its least material, do we have – or at least, why do I have – the strongest urge to attach material and meaning to it?” 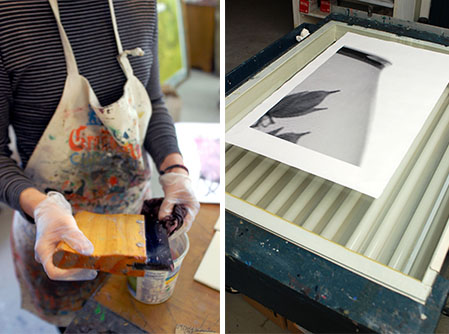 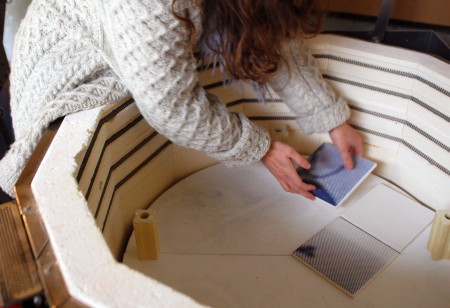 That her work is so fixated on loss and death is perhaps ironic. Effusive and energetic, Audrey is only 25 years old. She’s already spent a year on scholarship at the St. Michael’s Printshop in Newfoundland, and now she’s WSW’s Carolee Schneemann Legacy Artist-in-Residence. She can’t believe it’s all actually happening.

“It feels amazing to be here! It’s so, so exciting!” she gushes, gesturing wildly. “It’s really nice to see people doing what I want to do for the rest of my life and to be able to learn from them. And I like that there’s not a huge distinction here between making art and living, because that’s how I want to live.”

Audrey’s lust for life belies the gravitas of her work, which focuses on the transformation of materials and the loss of solid objects or bodies. “I think about shapes and marks…and about living and dying,” she says with a grimace. “I want people to think about the marks or traces they’re leaving behind.” 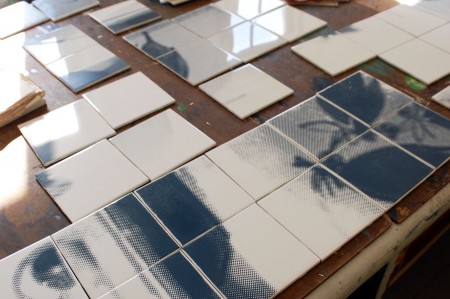 In 2011, after a death in the family, Audrey began lining the bed of a kiln with tile, topped with flammable domestic objects coated in glaze. Inside the kiln the objects burned and disintegrated, the glaze and metal pieces falling and fusing to the tiles. Gruesome and beautiful, these collapsed remains have an earthy decayed quality, like mournful monuments to objects that had to be destroyed in order to create these marks.

“I had a visceral reaction to what was left behind by that destruction,” she says. She immediately began thinking about “violent and slow impressions, the act of making a mark, and how these things manifest. Sometimes it’s horrifying and sometimes it’s gentle.”

Obviously, Audrey has approached mark-making in some unconventional ways. She once rolled a 50 lb plasticine ball through soap and across litho stones several times to build up layers of nearly transparent marks. Her current installation in the WSW gallery includes three balls made of layers of paint, stucco, and wallpaper that she used as the basis for other litho prints. 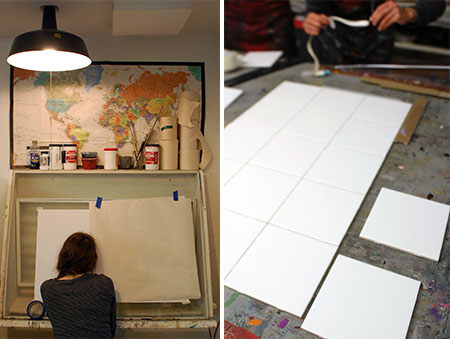 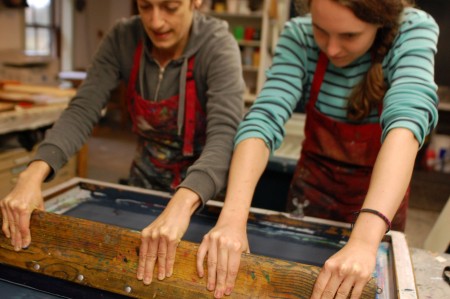 Her current project, with its fairly straightforward process, is allowing her to hone her more traditional skills. Audrey is now trying to print from smaller, more manageable screens, and attempting different firing temperatures to get the color just right. She’s thinking about how these precious tiles making up her six-foot urn can get lost and break, about the way she uses materials and her desire to create a physical proxy for immaterial things.

Audrey is humbled and a little nervous as she gazes into her future. She’s unable to shake the quintessentially twentysomething urge to do everything right now and her humble disbelief that full-time art making has been a viable lifepath for her so far. 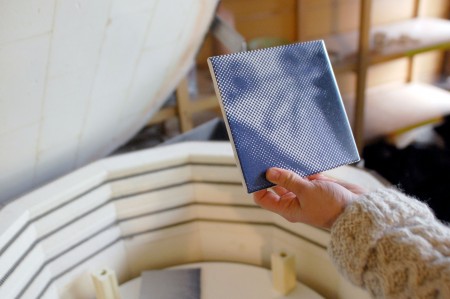 “I find it really encouraging to see a whole life of making,” she says, citing the long careers of Louis Bourgeois, Betty Goodwin, and Mary Pratt as inspirational. “Sometimes I feel like I have to do everything at the same time and every idea has to happen right now, but when I see these people’s careers, I admire that this is a long process. I admire their perseverance.”

“My motto is trying to do this” – she pantomimes a small amount – “rather than this” – she flails her arms around herself and laughs.

Audrey Hurd, originally from Perth, Ontario, holds a BFA from the Nova Scotia College of Art & Design. After her residency at WSW, she is heading straight to the Banff Centre for a year-long work exchange. (“So nuts, right?!” she says.) Audrey’s ideal studio space includes a window, sweaters, a vast range of music and podcasts, and a door for closing. Her website is forthcoming, but you can see more images of her Studio Residency with us here.

Check out more info on WSW’s Legacy Residency Grants, which are hand-selected by our annual gala honorees, here.